About Those New Emojis For People With Disabilities 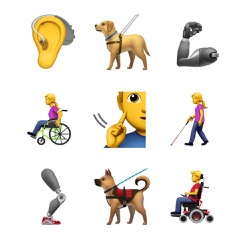 It’s been a little over a week since Apple announced that it has developed a series of accessibility Emojis to better represent disabilities. Apple acknowledged that the list is just a starting point; there may be more to come. There was an initial flurry of publicity, even getting a spot on Taxi TV in New York City yellow cabs. Publicity died down rather quickly, perhaps because proposing emoji is just step one. Emoji are submitted to the Unicode Technical Committee, where members deliberate over whether to accept them. That committee will meet in April, and if it approves these proposed Emojis, they will be put on a shortlist of candidates for Emoji 12.0, which will be released in the first half of 2019. Who knew it was so complicated? Not this writer.

To get back to the emojis themselves. They Include:

When I first saw the pictures of the emojis, it struck me that they’d perhaps be more useful as symbols on signage than additions to text messages. On signs, they’d alleviate the need to translate such messages as “Service Animals Welcome” into multiple languages. As text emojis, I wasn’t so sure.

To gauge reactions from an admittedly small number of persons, I did what any social media user might do. I asked my Facebook friends, who include several advocates and disabled persons, for their thoughts. What follows are their reactions.

James from Mississippi commented: “as a hearing aid wearer, I don’t see the point. They seem far more likely to be used sarcasto-ironically. “ Jessica, a pharmacist who happens to be deaf, countered with: “I saw the article. I think these are nice emojis that depict deaf and hard of hearing people, blind people, prosthesis, service dogs, and wheelchair users. I think emojis are just what they are, emojis. If people use them in a nice way, that’s good. If they are used in a vile way, then we have to remember it’s the user’s issue. “

Donna from Maryland had this to say: “I think the emojis (used appropriately) create an increased awareness that pictorial[ly] may be helpful for communicating with or about disabled people.”
Dorothy from New York City noted that as a non-disabled person, she didn’t see the point of the emojis, but added, “I guess what I’d really want Apple to do is be sure all their workplaces are fully accessible, and improve the percentage of disabled workers. Also, they could help cities like NY, by giving funds to retrofit the old subway stations with elevators. Symbols can be useful, but money more so. “ I myself am not sure what the logistics of a private corporation transferring money to a city are, and I am hardly an apologist for Apple, but I have some empathy with this sentiment, since there are so few elevators in our subway system. That was painfully obvious to me five years ago when I had temporary mobility impairment.

Some others merely “liked” the idea, with no further comment. On the news sites that reported the story, most comments were favorable, noting that anything that helps make different abilities more visible and more mainstream can be helpful.