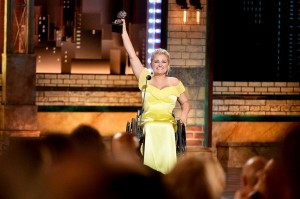 Ali Stroker became the first person who uses a wheelchair to win a Tony Award at this year’s ceremony in New York City.

Her historical win was for Best Featured Actress in a Musical in the acclaimed Broadway revival of “Oklahoma!”

There was one glitch.  No ramp had been built to connect the audience seating area to the main stage. In one instance, Ali had to wait in the wings on stage in case she won in her individual category. Then when “Oklahoma!” won Best Revival of a Musical, Stroker could not join the rest of the cast and crew on stage to accept the award. The moment was a reminder that basic universal accessibility needs are still easily overlooked.