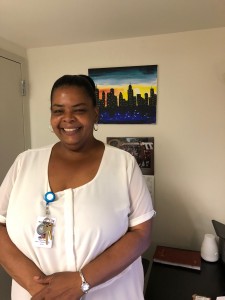 Growing up on Manhattan’s Lower East Side in the 1970s, Diana Turner (pictured above) most remembers the fierce sense of community.
“I grew up across from Tompkins Square Park. Back then the neighborhood was called alphabet city,” says Diana, who joined the Barrier Free Living team this June (2019) as program director at our supportive housing program in the Bronx (BFL Apartments)*. “I saw the homeless problem. I also had a real sense of community and the importance of family.”
While she initially wanted to be a nurse, Diana first got a job with the NYC Department of Education.
“I worked with kids labeled emotionally disturbed. I was drawn into social services.”
In 2004, Diana joined Safe Horizon as a residential specialist and a half a year later became a supervisor. While she found the work meaningful, she eventually suffered burn out.
“It was becoming overwhelming because I didn’t understand the work I was doing. I wanted to understand it better.”
Diana sought more education, and pursued a master’s degree in social work from Hunter College, while working as a program supervisor at Palladia (a domestic violence shelter) in 2011. In 2014, she became program director at Community Access.
“The program was on 3rd Avenue. It was a supportive housing site, in some ways similar to Barrier Free Living Apartments,” she says. “When I learned of the opening at BFL Apartments, the idea of working with people with disabilities in the mission statement really attracted me.”
In her first month on the job, Diana says she immediately noticed how the residents at BFL Apartments create their own sense of community, something familiar to her.
“It’s similar to the way I grew up on the Lower East Side. People hung out and talked to each, and we respected one another.”
And what about the intensity of the work she does?
“I’ve learned a lot. Every day is a new day.”
*BFL Apartments provides permanent homes to survivors of domestic violence with disabilities. Barrier Free Living has been working with people with disabilities for nearly 40 years.