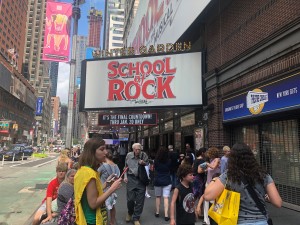 Staff and 18 kids took in the sites of Time Square and enjoyed a matinee performance of the musical extravaganza, which is about a substitute teacher at a prestigious prep school who discovers his students musical talents and forms a rock group.  This outing was was sponsored by Ms. Angela Donadelle (Program Coordinator) at The East Harlem Community Partnership Program/Union Settlement.