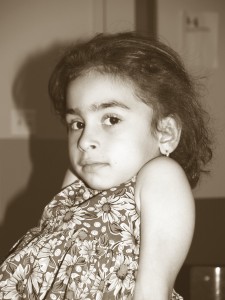 Blog contributor Sara Eldridge, LMSW,  is a Senior Social Worker at Barrier Free Living’s Freedom House domestic violence shelter. Sara is a licensed social worker who received a Master’s Degree in Social Work from Silberman School of Social Work at Hunter College in 2015.  Sara has been a social worker at Freedom House since 2015, where she provides individual and group counseling to adults, children and adolescents. Prior to Freedom House she worked with youth in alternatives to detention and incarceration programs, student veterans and crime victims.

Approximately 12.7 to 17.9% of American children have been exposed to domestic violence (Centers for Disease Control, Department of Justice Office of Justice Programs).

Children who witnessed the abuse of their mother are at an increased risk for substance abuse in adolescence and adulthood, as well as chronic physical and mental health problems such as mood disorders (Webb, 2013; Jaffe, et al., 2012). They are also more likely to experience developmental delays, behavioral problems and poor school performance than those who have not been exposed to domestic violence (Woods & Sommers, 2011; Gilbert, Bauer, Carroll and Downs, 2013).

As these statistics demonstrate, domestic violence affects the whole family, not just the adult victim. Children may feel a confusing mix of anger, fear, and love for the abusive parent, while feeling a desire to protect or defend the victim (The National Domestic Violence Hotline). They may blame themselves for somehow causing the violence or not doing enough to stop it. (Office on Women’s Health). Sadly, children of domestic violence often learn that violence is a way to express love and that violence is an effective way to control situations (National Child Traumatic Stress Network)

Parents who are experiencing or have survived domestic violence are often traumatized and have difficulty coping, which can make it difficult to provide the support their children need. At Freedom House, a full-time Coordinator of Family Services provides assistance in these situations. The coordinator can refer families out for therapy, early intervention assessments, parenting classes, or other programs as needed.

Unique among domestic violence shelters, Freedom House also provides in-house counseling to children between the ages of 4 and 18.

Two well-stocked play therapy offices contain art supplies, puppets, dolls, Play-Doh, and sandboxes. Children are invited to explore the office and choose the toys or activities they want to play with during their session. Social workers provide the children with a warm, nonjudgmental space to explore complicated feelings about domestic violence, previous trauma, relationships with their parents and struggles at school through art projects, pretend play, even board games.

One family with six children arrived at Freedom House after years of domestic violence and abuse. Fortunately, all of the children were able to meet with Freedom House counselors to begin processing their feelings about their experiences.

Several of the children initially struggled to engage in the counseling because they were not used to having the freedom to discuss negative emotions such as anger or sadness.

Over the months that we worked with them, they became much more enthusiastic about and invested in the counseling, drawing pictures of themselves and their families, using puppets to talk about conflict resolution and making pillows symbolically filled with their hopes and dreams.  Their mother reported that the family was communicating better, the children’s behavior had improved, and they were less worried and sad than when they arrived.

One of the teenagers found a part-time job with the assistance of his counselor. His younger brother, who initially compared himself to the Hulk because of his anger, learned to better regulate his emotions through simple techniques like breathing and visualization, leading to fewer arguments at home and at school.  Although the family continued to need therapy after leaving Freedom House, they had begun to deal with their trauma and to learn healthy coping skills.