No Barriers Summit: Innovation For People With Disabilities

Blog contributor Julia Alberino retired in 2011 after more than thirty years as a health care administrator in both the public and private sectors. She was a frequent speaker at professional conferences, and co-founder of an advocacy group that worked to maintain and improve services for Medicaid beneficiaries, including elderly and disabled individuals.

“What’s within you is stronger than what’s in your way.”

That’s the motto printed on the tee shirt given to all participants in the No Barriers Summit that took place in New York City on October 5 and 6.

On the back of the shirt, and in much of the No Barriers media, are listed the seven aspects to a No Barriers life: vision, reach, pioneer, rope team, alchemy, summits, and elevate. Defining and commenting on each of these would take more than this post. Instead, I will highlight some of the presentations I attended.

At the conference, I chose one of several educational tracks for the first day of the Summit, and choose the sessions within the track that I wanted to attend. Below are some highlights.

Dr. Ann Spungen, a spinal cord injury researcher from New York’s Mt. Sinai Medical Center and one of her patients presented a fascinating description and demonstration of exoskeleton assisted walking for paralyzed persons (photo below).

This assistive technology has only been in use since 2010, and, as Dr. Spungen explained, “isn’t ready to replace the wheelchair just yet.”

Nonetheless, exoskeleton walking is an adjunct to wheelchair use that can enable users to stand and walk for at least short periods.  Using the device is slower than using a wheelchair.  The technology is ever-improving, and enables users, as one user put it to “look people in the eye; hug my wife, and take my kids to the park.”

Another user commented that he was able to reduce the use of pain medication since he began using the exoskeleton.

There are strict criteria for someone to be able to be trained on exoskeleton use: the person must not have excessive bone loss, contractures, or extreme fragility (these devices are heavy).

Under the terms of the FDA approval, the device must be used with crutches, and requires that an assistant be present.  As the technology improves, these restrictions may be lifted in the future. Dr. Spungen mentioned that many engineering schools are working on improved models of exoskeletons that will be lighter, smaller, and able to be used for longer periods of time. 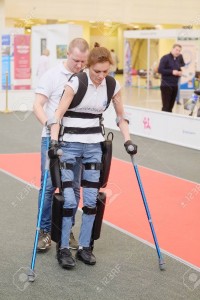 Another notable presentation was given by Jen Owen, founder of e-Nable, which is an “open-source world-wide maker movement” that uses 3-D printer technology to make prosthetic hands and arms for those who have lost a hand or arm.

The starting point for e-Nable happened when a friend of Jen’s made a 3-D hand for a Steam Punk convention. The hand was notable for having working fingers.  The creator made a YouTube video which was seen by a carpenter in South Africa who had lost fingers and wanted to collaborate on making hands.

The two came up with a prototype; Jen started a blog; people began to follow the blog and began requesting prosthetics.  The first ones were metal, clunky and uncomfortable. Eventually the mass-production using 3-D printers was developed.

The prosthetics are low cost (around $50) and workable.  More information and actual downloads of the technology are available here.

Going from high-tech to low-tech (but in its own way genius) was the interactive presentation and demonstration given by Tammy Roussell,  founder of Mitsy Kits. I had the pleasure of speaking with Tammy over lunch and attending her presentation.

Mitsy Kits was born when Tammy’s mother, who had been a seamstress all her life, lost her sight. Tammy was looking for a way to enable her mother to continue sewing.

She developed the idea of a tactile border on the wrong side of the fabric, which would enable a seamstress to feel the straight line for the stitches.  From small beginnings, the Mitsy Kit concept now has over twenty different kits available to make everything from pillows to quilts.

As part of Tammy’s session, participants were provided with fabric with the tactile border, stuffing, needles and thread, and a blindfold (optional, to simulate visual impairment).

We made small pillows that we were allowed to take home.  Having an activity made Tammy’s session memorable for us participants and left us with a tangible reminder of the session.

These highlights give the flavor of the No Barriers Summit.   After the summit, in a follow-up e-mail transmitting the evaluation questionnaire, I learned from the organizers that the New York City Summit was the first time they’d offered a summit in an urban setting. All others had been in mountaintop locations; i.e., literal summits.  As of this writing, the 2019 schedule has not been made available.