Pet Therapy For People With Disabilities & Survivors Of Domestic Violence

Barrier Free Living welcomes Blog contributor Julia Alberino. Julia retired in 2011 after more than thirty years as a health care administrator in both the public and private sectors. She was a frequent speaker at professional conferences, and co-founder of an advocacy group that worked to maintain and improve services for Medicaid beneficiaries, including elderly and disabled individuals. 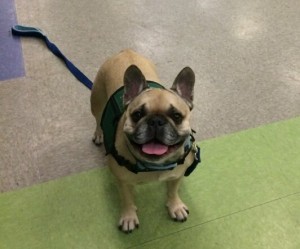 I’ve always been a cat person.

When I moved into my lower Manhattan apartment in 1990, my cats came with me. At that time, pets weren’t technically allowed in the building, but the landlord looked the other way as far as cats were concerned.

Some years later, the building was sold and the new landlord changed the policy to allow both dogs and cats. My neighbor across the hall adopted a beagle named Molly from a city shelter. I learned that she was taking Molly through pet therapy training, a concept that intrigued me.

I soon learned from Molly’s owner that pet therapy dogs were different from service dogs, in that they are not serving one person only, the way a guide dog for the blind might. They work with their owners (referred to as handlers in the pet therapy world) to bring comfort and calm to people. I found a definition of pet therapy on a general information site called Healthline:

Pet therapy is “a guided interaction between a person and a trained animal. It also involves the animal’s handler. The purpose of pet therapy is to help someone recover from or cope with a health problem or mental disorder. “

In reality, the benefits of pet therapy go far beyond that definition.

Pet therapy animals are involved not only with persons with acute health problems or mental disorders, but also with persons who are disabled, have experienced trauma, or are elderly, or are children who may or may not have behavior or learning problems.

For nearly two decades, Barrier Free Living has used pet therapy in its work with both people with disabilities, and survivors of domestic violence with disabilities at its shelters and programs. When Patricia Motus arrived at Barrier Free Living’s Transitional Housing program as the Occupational Therapy Consultant twelve years ago, there was already a therapy dog named Luca who visited once a week with her handler.

Patricia observed the beneficial effect Luca had on the residents with disabilities, and when Luca passed away, Patricia took her dog Nina, a French bulldog, through pet therapy training. Nina then became the pet therapy dog at the BFL transitional housing site downtown.

Motus says pet therapy is “great for everyone, not just the residents but also the staff. Jobs can be stressful and having the calming presence of the dog around can diffuse the stress.”

A resident at Transitional Housing made a pen-and-ink drawing of Nina on a T-shirt to express gratitude for the pet therapy sessions. When I visited Patricia in her office, I saw that the shirt was framed and occupied a central place. 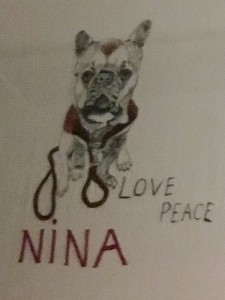 Through Patricia, I connected with Audrey Hendler, founder and driving force behind A Fair Shake for Youth.

Audrey founded the organization in 2010 after teaching with Puppies behind Bars and observing the beneficial effect the pups had on the inmates.  Audrey started A Fair Shake because she recognized that therapy dogs might help youth to build empathy and self-esteem and thereby reduce such problems as bullying. Audrey and her therapy dog Lucy are now one of 35 pet therapy teams currently involved in A Fair Shake.

At Freedom House, Audrey has modified the curriculum to take into account the fact that the age range of the participants goes beyond 11-13. Any child/youth residing at Freedom House who wants to participate is allowed to do so. This is different from the program in the middle schools, in which the schools may have specific selection criteria for participation. Audrey says the Fair Shake teams working at Freedom House find the work especially rewarding, as they witness the participants, whose lives have been disrupted by domestic violence, learn to communicate with the dogs, the handlers, and with each other.

“The kids (at Freedom House) come to believe in themselves,” says Audrey. “ They learn that they are smart, and they come to realize that they should treat people the way they want people to treat the dogs, with kindness and respect. The kids get a lot out of the interactions and communication with the dogs; they succeed with the dogs and it helps them see that they can succeed in other ways.”