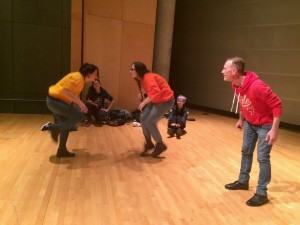 This profile is by Liam Chan Hodges, a summer intern in BFL’s Communication Department. His writing has appeared in Study Breaks and elsewhere. He is currently pursuing a government major at Franklin and Marshall college and will graduate in 2019.

David Drake is a man of many talents. He has gained success as a playwright, a stage director, an actor and an author. His most acclaimed piece The Night Larry Kramer Kissed Me, a show which he wrote and performed, received three awards, The Village Voice Obie Award, the Drama-Logue Award, and a Robbie Stevens Frontiers Magazine Award.

However his project this summer is of a slightly different nature. From July until August, David will be working with the children at Barrier Free Living (BFL) apartments in the Bronx on a summer theatre camp. Barrier Free Living apartments has 120 units of supportive housing for survivors of domestic violence with disabilities and their families, as well as veterans with disabilities. There are 91 kids living at the complex.

The ten-week camp will cover aspects of theatre craft and history, as well as honing in on the kids’ specific talents and interests. The camp will culminate with a show.

David is no stranger to the benefits that theatre can have on children. He was introduced to theatre at the age of nine when his mother, in an effort to cut down on babysitting costs, brought him along to a musical theatre class she was attending. The class final was performing in a musical called “The Most Happy Fella.” David ended up performing in the show, a show that would turn out to be the first of many.

“I was a natural show-off with a lot of energy, so singing and dancing and acting was a good fit. Plus I loved the camaraderie, and the goals of doing something together as a group, as a team. For a goofball nerd like me, it was a great alternative to playing sports,” says David (pictured below, and at top in a rehearsal). 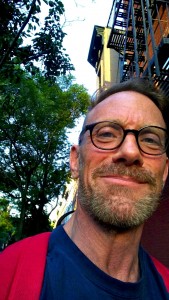 There is little doubt that theatre has shaped almost every aspect of David’s life, both on and off the stage.

“It’s taught me so much about compassion and empathy for others,” the playwright explains. “Not only in the group sense of doing a show together, but also specifically in playing characters — you need to empathize with the character, understand and believe in their actions, in where they come from even if they’re very different from my own upbringing.”

It is this sort of experience that he hopes he will be able to impart upon the children of BFL apartments during this summer’s camp.

“Theatre performance for kids — or production, too: writing, choreographing, singing, creating sets and costumes — is a great tool for building trust and faith within a community,” says David.

In David’s experience, theatre is an activity that demands that those on stage be completely in the moment with one another.  At the same time they must be able to communicate a story that is not necessarily their own. This ability to understand another person’s struggles, to step inside their shoes, is a key skill when it comes to building healthy and supportive communities. The exact sort of communities that Barrier Free Living is working to create.

“In this way, doing theatre is an act of personal pride and honor, but also being a genuine act of service to the community,” David explains. “It’s a great energy exchange that connects people of all walks of life. The flow from the storytelling performers onstage to the audience — who WANT to receive the story — is incredibly powerful and healing. It’s the magic connection between the two entities that keeps me going.”

David has had many idols throughout his life, from old timey singer-dancer types like Gene Kelly and Fred Astaire, to writers like Tennessee Williams. However it’s his off stage idols, activists and politicians like Larry Kramer, Gloria Steinem, Barney Frank, and Barack Obama, that make us here at BFL the most excited to have David working with our kids, and perhaps it is his respect for these activists that explains why he was able to fit right in with our organization.