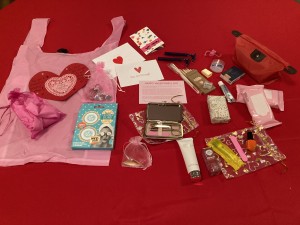 What began as a close-knit effort to give a few dozen gift bags to survivors of domestic violence on Valentine’s Day has bloomed into a community-driven project delivering nearly 600 bags to 5 different shelters.

This year, Barrier Free Living is the latest recipient of beautiful, bountiful gifts (photo above) prepared by the Valentine Community Project, bringing joy to the residents and tenants at our domestic violence shelter and program. We caught up with program founder Emily Valentine Sottile to find out about the groups roots and growth.

BFL: What originally inspired the creation of the Valentine Community Project.

Emily: The Valentine Community Project is a community response – I never would have come up with the idea on my own. Nearly a decade ago the colleague of a friend was participating in a Valentine’s day effort to give 17 gift bags on Valentine’s day to residents of a shelter for domestic abuse and trafficking in Brooklyn. My friend knew this is something I care about and offered my help. I liked the idea of celebrating Valentine’s day by making people feel loved, more than going to a crowded restaurant. I have always thought of Valentine’s day as a community holiday, but I know a lot of people don’t like Valentine’s Day and I imagine being in a shelter because of intimate partner violence or trafficking would make this day especially hard. We make our communities stronger, safer places by loving our neighbors. This is a small way of showing that love.

BFL: How did you gather your supporters?

Emily: We thought other people might feel the same way so, I sent an email to a handful of friends and family and the response was incredible. Some people sent in money, the mother of a friend had a shop and sent in beautiful jewelry, another friend dug into her closet and sent “lady gifts” like stationary and beautiful gifts she wouldn’t miss, a teacher had her third graders make cards. It was truly a stone soup effort!

It felt so good to give that we decided to do it again the following year. In the third year we planned to make up 30 bags but the response was so abundant that we made 60! A big part of that growth was one woman I volunteer with eleswhere who had a lot of beautiful things to share. A guy I grew up with has a cousin who travels for work so he reached out to him and he sent us a big box of toiletries he collected. The following year the wife of a colleague who worked at a magazine sent boxes of cosmetics, some people sent in one thing, other people sent in lots.

That year we made up 300 gift bags, one for every adult resident at Safe Horizon’s 8 NYC facilities. Word just spread. A friend of a friend is a teacher whose students needed community service hours, so they worked on the Valentines and that lead to a space we could work in, a colleague owns a pilates studio and they put the word out to their clients, my cousin coaches hockey and got the JV & Varsity teams involved. 2021 is the 9th year and we were able to prepare 594 gift bags for residents at 5 shelter systems.

BFL: Can you share a special moment you have experienced since starting, something that stands out for you regarding the project and how it impacts people?

Emily: I am amazed and really touched by the diversity (age religious, socioeconomic, political, geographic) of the people involved in the project – people who might not think they had anything in common with one another come together to make this happen. People I have never met come together to generously give to people they will never meet! It really reminds me of the goodness of humanity. This project has taught me a lot about faith and community. There’s a core group of people who are involved every year but a lot changes. People who really helped make it happen passed away, change jobs, and experience other big life changes or, you know, a pandemic hits. Each year I think “How are we going to do it this year?” And then the answer emerges – it is always better than the one I would have imagined.

BFL Team member Irma picking up an abundance of gift bags for our programs. 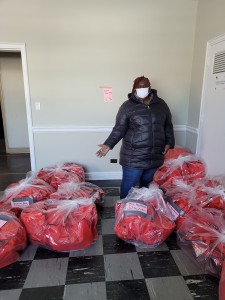