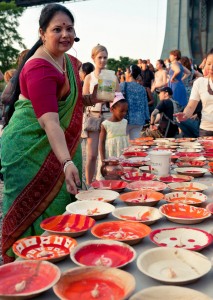 Why not wind down the season back where we started, at Brooklyn Bridge Park, with a pair of intriguing events in August. On Aug. 2, Aeilushi Mistry, a classical Indian dancer and arts educator, will conduct a Hindu aarti lamp-lighting ceremony, a traditional petition for peace and prosperity, at Pebble Beach, between the bridges in Dumbo. On Aug. 23, Revolutionary War buffs, again at Pebble Beach, will hold an annual re-enactment of George Washington’s harrowing escape from British forces in the Battle of Brooklyn. Both events are, of course, FREE.