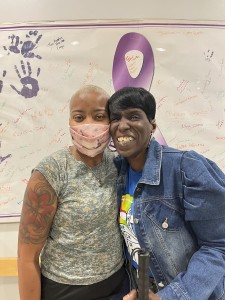 Diane (on the right, 2022) with Simone BFL Occupational Therapy Director

Diane will always remember Christmas Day 2016. It was the day she lost her sight.

“My children lived with me, and when I lost my sight they took advantage of the situation,” says Diane whose husband passed away in 2009. “They mentally, emotionally, financially and physically abused me.  The straw that broke the camel’s back was when my daughter punched me. She didn’t like the fact that I said she had to pay the money back (she owed).”

At that time, Diane was involved with The Lighthouse Guild, studying braille. With their help, she found Freedom House. Initially, she struggled at the shelter.

“When I first got here (Freedom House) I was angry. My mind frame was to not connect. I felt I was on my own. I was smack here in the middle of Covid. I felt like a fish out of water.”

Soon, Diane connected with Tanisha her social worker along with Aida and the on-site nurse Hilda. She began to meet other residents, attend domestic violence support groups and joined a financial workshop that helped her with credit issues. The team also helped her set up her phone with an app to be able to use email.

“They were patient and understanding,” Diane says. “I was mentally emotionally and spiritually dead when I came. Freedom House breathed life into me. They put the smile back on my face. I owe Freedom House my life.”

This spring, Diane moved into her own home, a one-bedroom apartment. She plans to connect with Barrier Free Living’s Secret Garden counseling program and will also reconnect with the Lighthouse Guild.

“Freedom House gave me back my independence,” says Diane.